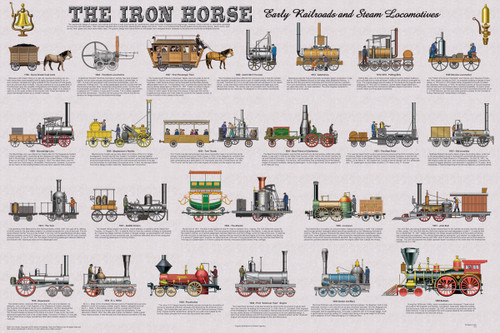 This poster is 36" x 24" and makes the perfect addition to a classroom, study, or children's bedroom.

Railroads changed America as they provided a fast and efficient means of transporting people and goods for long distances. This poster presents the early history of railroads and steam locomotives. Rails reduced friction and increased efficiency and trains began as horsedrawn carts that carried coal. In 1804, Richard Tevutchick introduced the first steam locomotive. Other Englishmen vastly improved on it. Robert Stephenson introduced his famous Rocket in 1829. This poster shows these English locomotives and two that were imported to America. The most important was Edward Bury?ÇÖs Liverpool design. Almost 100 of them were used by American railroads.

The vast distances that needed to be covered resulted in constant innovation and new developments. The bulk of the poster is devoted to the many American designs that followed. It shows and explains all the milestone locomotives made in the U.S. prior to the Civil War. They include the 4-2-0 Jarvis design and the 4-4-0 American design. By 1850, American locomotives had cow-catchers, headlights, whistles, and bells. The basic 4-2-0 design dominated our nation?ÇÖs railroads for over a half-century. This early devolpement is presented through highly-detailed illustrations.